Poetry from a Dublin Scientist

I’ll remember it all
Every second, every instant
Every word, every look
Every touch, every kiss
Because with you
Every moment lasts a lifetime
Every day lasts an eternity
I have spent all the time in the world with you
When it lasts this long
How can it not be memorable? 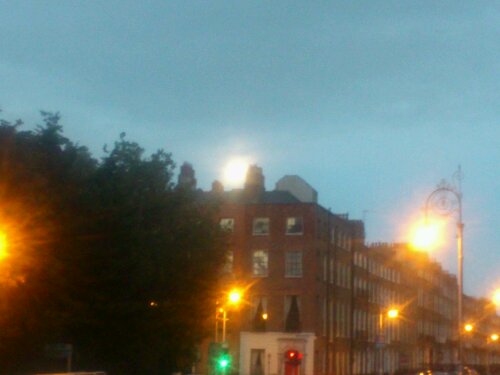 Meeting the parents
I shouldn’t worry too much
You like me, so’ll they

Early one evening on a late Summer’s night

Young men and women are cowering in fright

Done up in dresses, the finest of threads

Nervously waiting for the start of their debs

Young lads in tuxes pining for a date

Ladies waiting to be fashionably late

Couples and singles, and friends by the score

Waiting to see what the debs has in store

Drunken hijinks were meant to be banned

For that kind of stuff, the parents won’t stand

But the fact was most of them were over-age

And when it is legal, drinking’s the rage

The music started, the dancing began

With young boys and girls the passion soon ran

The young teens were at it like monkeys in heat

The party stopped at the stroke of midnight

By the time it was over the place looked a sight

Just like every debs that had been there before

Roar of jet engines
She ducks, a plane flies over
It is far too low

Hi there! It’s that time of the month again. Time for another collaboration with that talented writer and my good friend Scriptor Obscura. We each contributed different parts to make the whole story but I’m not telling who did what. Enjoy 🙂

There is a period of a few months every year from when the heat of High-Summer ends to when the chill of Fall starts to bite when you can walk around the city quite comfortably. Needless to say I always aim to take advantage of this brief respite and enjoy going for long walks around the neighbourhood in the evening.

The best part is that other people have the same idea. You can find the whole world out in the street on days like this.

One evening as I was walking, several fire trucks raced past me in the opposite direction, sirens blaring. I turned around. Thick smoke was pouring into the sky from some distance away.

Shit! I bit my lip. I’d forgotten to turn off the bloody stove! Shit!

I ran back as fast as I could go, my lungs burning.

I sprinted past slow walkers and twisted my way around the groups of friends talking on the sidewalk. There were some shouts from people I nearly collided with but I made good progress.

I came to my street and saw that it was blocked off by several squad cars and the fire trucks. I found to my relief that the smoke wasn’t coming from my house but rather from the garage of the Smiths from across the street.

I could see Denise and Gary Smith on their front lawn. They were shouting and screaming at each other. Some of the cops had gotten between them and they seemed to have difficulty keeping them apart.

The smoldering husk of a Range Rover lay crumbling in the driveway, tendrils of steam rising like fresh-baked bread. A small crowd had gathered, neighbors and onlookers, many with cellphones recording the scene.

“You son of a bitch. I found her pantyhose in the front seat. That secretary. I knew it!” Denise glared, fuming.

“Well, you weren’t giving me any, so I had to look elsewhere! What did you think I was, a monk?!”

“Throwing a match in my car?! You’re psychotic!”

Before he was finished cuffing her Denise broke free.

“Psychotic? You bastard!” She pushed the other officer from in front of Gary throwing herself at him.

“I gave you ten years of my life,” She pushed him to the ground starting to hit him on the face and chest, “And you waltz around with that…that.. trollop… that child!”

Some of the onlookers shouted cat-calls and cheers as the two started to wrestle with each other on the grass.

One of the officers approached them “Cut it out! Now!” In his hand was a can of pepper spray.

Suddenly a voice pushed through the crowd, shouting.

“Wh-what?” The fighting stopped momentarily as Gary propped himself up on an elbow, wiping blood from his nose. “Mr. Jones…sir…”

“You filthy pervert,” Jones spat. “I know what you did. That secretary, Sheila? She’s my wife!”

“This is better than TV!” the man next to me smirked, grin spreading on his face.

Gary looked at him. “What are you grinning at?”

He was about to get up again when there was a movement from one of the officers and a buzzing sound. Gary collapsed onto the ground. Denise, still on the ground with another officer reaching to restrain her, gave Gary a kick and laughed.

We all watched as the two of them where cuffed and led, Gary still visibly woozy, into separate patrol cars.

The last words we heard was Denise “You’d better put us in separate cells. I cannot guarantee the bastard’s safety if you don’t”

Early morning
Parked in front of school gates
Dressed to impress
In figure-hugging dressing
Undoing seatbelts is complicated
She takes her time
All the better to see her
To catch the eye of passersby
And with it the faintest of smiles
As the Yummy Mummy knows
She’s still got it.